The Perthshire Art Association exhibition was launched on Thursday 7th November and was well attended by Rotarians.

The winners of the young artist competition were:

NB. Due to the effort, constant chasing up and general lack of response from schools that Janet faced in this year's competition the Youth Committee will re-visit this and debate whether we will repeat it.

This will again be at the Abernethy Trust Activity Centre in Nethybridge on the following dates for 2020.

So far, we've had three expressions of interest. If any Rotarians have children, grandchildren, nieces, nephews, family friends etc. at an age (16-18) where they may want to take part, then please let me know.

I have emailed our contacts at the schools where we organise Mock Interviews but had no luck.

I’ll speak to Jon Kidd at Letham AFC to put publicity posters up at the club.

I’ll liaise with the youth convenors at the other Perth clubs to organise a day for interviewing candidates, probably by end of Feb.

Deposits need to be paid by end Jan, club previously agreed we would again sponsor two young people (a boy and a girl).

Date for this is Tuesday 4th February.

Perth High School and Perth Grammar School have replied and stated they will enter. Plus, another three from the musical theatre course at the college.

I met with Vicki Rice (musical theatre lecturer) on Weds last week. She will organise MC’s for the evening  and will also organise other students to help out on the night.

Michael Ellacott and Debra Salem have both agreed to judge this time again, I've still to speak to Pete Caban at Bandwagon to see if he also can and to buy vouchers for prizes (note – SF to speak to council about getting money for prizes).

I’ve contacted the Music Department at Perth College to see if they also want to enter. I didn’t realise that Music and Musical Theatre were separate.

I'll be looking for volunteers for stewarding/ushering plus the bar and raffle.

I'll also be on the scrounge for raffle prizes, so watch this space.

Will pursue this in the New Year.

Ken Thomson is looking after this and will be in touch with Sportscotland in December to rustle up some applicants' CVs.

Frank Sloan has had a phenomenal response to this – all eight senior schools in the area have expressed an interest in taking part. 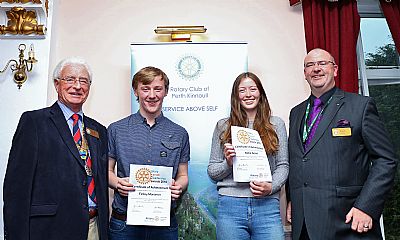 The two 2019 RYLA candidates that our club sponsored to attend the RYLA training camp at Nethybridge in the summer are pictured with President Ian and Youth Convenor Steve Fairlie.

Katie Grant and Finlay Mortimer came to our meeting on 3rd September to tell the us about their adventure and share some of their experiences.

Both were pupils of Perth High School when selected although Katie is now part of Perth College UHI.   They exuded enthusiasm while describing their exploits which included Mountain Biking, Gorge Walking and Canoeing.

It was great to see two previously shy young people able to speak to the club members so confidently and to demonstrate just how much they had gained by being part of the RYLA experience.

The club wishes good luck to both Katie and Finlay in future and we hope that their bruises heal soon.

We have been contacted by Scott, whom we have supported as a top youth sportsman, as he heads off to South Korea. The support we give will go towards new kit for the year ahead.

Scott will be with Team GB in South Korea from the 6th July. Then he heads for San Francisco on the 29th July to swim for Scotland.

We all wish Scott the very best and look forward to hearing more soon.

Just to give you an update on my Summer of swimming. The picture L-R is myself with Duncan Scott,James Guy and Ben Proud. It was taken just after we came 5th at the world championships in South Korea last month In the 4x100 free relay.

No medal on this occasion, however coming 5th meant that GB automatically qualified for the Olympics next year in that event.

From South Korea I went to Stanford University in the USA, I was disappointed in my individual swims, however as part of Stirling University we won a bronze medal in the 4x100 medley relay.

Once again thanks for the support from the Rotary, I’m having a few weeks off now from counting the tiles at the bottom of a pool 😊

Four schools have taken part in the new competition; Perth High, Perth Academy, Strathallan and Glenalmond. The competition has been open to pupils under the age of sixteen who can send in up to three photos. The closing date was Friday 25th January 2019. There is a handsome Rotary trophy for the winner, together with prizes for those placed first, second and third in the competition. 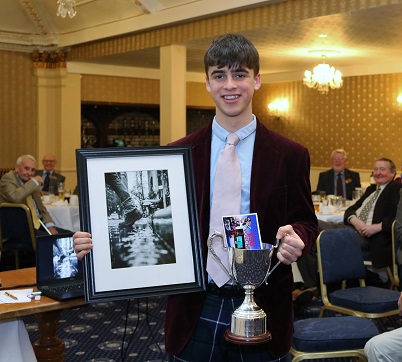 Marcel Betlinski, pictured above with the trophy and his winning photograph, took the laurels of the Young Photographer Competition. The photograph called New York Footstep was selected as an 'interesting and unusual point of view, perfect set-up and perfect exposure' by the judges. The competition was judged by Brian Johnston, Frank Sloan, Chas Seivewright and Alan Brown who felt that all three of Marcel's photographs were excellent. Marcel, a student, won the prize for Glenalmond School. Second place went to Perth High School and third to Perth Academy. 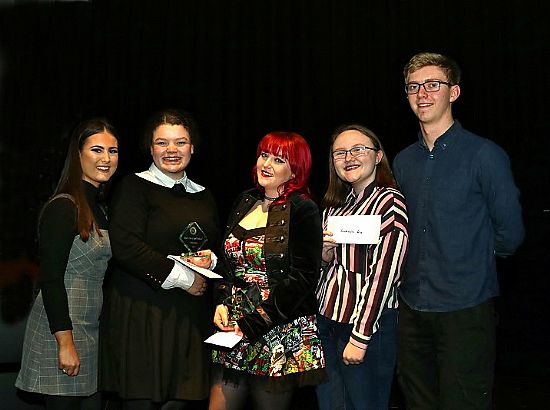 The event took place on Tuesday 26th February at the UHI. The winners are shown in the picture above: left to right Abbie Henvey, Rhona Jack, Amy Flanagan, Sarah Dickie, Jack Given.

Special mention - Abbie Henvey of St John's Academy for the most captivating song. 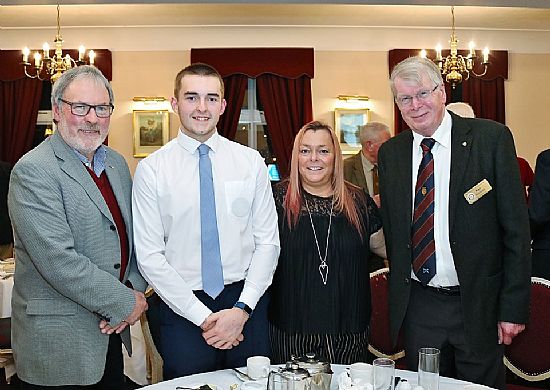 Ben Leitch, a Scottish wheelchair basketballer from Perth, has been picked by the Club Members to receive support as a selected athelete for 2019. He is pictured with his mother and committee members, Chris Kirk and Ken Thompson.