The Rotary Club of Perth Kinnoull was established in 1992 in response to the growing need for a club that met in the evening, rather than at lunchtime. The Charter Dinner was held on 30th May 1992 at the Grampian Hotel, Perth.

The Club Charter was presented by District Governor G. McFatridge. There were 26 members at the start and the Rotary Club of Perth was the Foster Club.  Our 20th Anniversary Charter Dinner was held on 1st June 2012.

Our membership base is diverse. With its fair share of lawyers, educators and bankers, it also includes dentists, surveyors, engineers and a wide selection of local business representatives. Indeed variety is our strength!

As one of the 86 Clubs in Rotary District 1010 - North Scotland, we are actively involved in local, regional and international projects.  We offer organisations practical and/or financial assistance as deemed most needed and  appropriate. Our members are committed to our local area and help and support many groups and organisations in our own community.
Thanks for taking time to look at our site, why not click on some of the links on the left and find out more about our club.

- and something about Perth

Rotary International has been represented in Perth since 1917 when the Rotary Club of Perth was formed. This remained the only Rotary Club in the City until the Perth St. John's Club was established in 1976. These Clubs meet at lunch time and, as work patterns changed towards the end of the 20th Century, the need was identified for a Club meeting in the evening. On the initiative of the Perth Club, which thus became the Foster Club, and under the guidance of the District Extention Officer, Past District Governor, Donald McDonald, the Rotary Club of Perth Kinnoull was formed. The Charter Dinner was held on 30th May 1992. Since then the Club has flourished with a changing membership but nevertheless retaining many founder members and past-presidents who enhance the Club with their collective experience of Rotary.

The new Club took its name from the 222 metres high Kinnoull Hill just a few minutes away from the City Centre. It is a hillside Woodland Park with several Sites of Special Scientific Interest (SSSIs). You can walk for miles without seeing another person and the view from the top is outstanding.

Perth has, for many years, been known as "The Fair City" and received back city status in Scotland in 2010 as part of the 800th anniversary of its Charter as a Royal Burgh, granted by King William the Lion in 1210. The centre retains the structure of a Mediaeval Town with three main streets connected by vennels with names indicating their ancient usage like Fleshers Vennel (Butchers) and Meal Vennel (Millers). There are many fine old buildings including St. John’s Kirk and King James VI Hospital, now converted to flats with all “mod cons”. 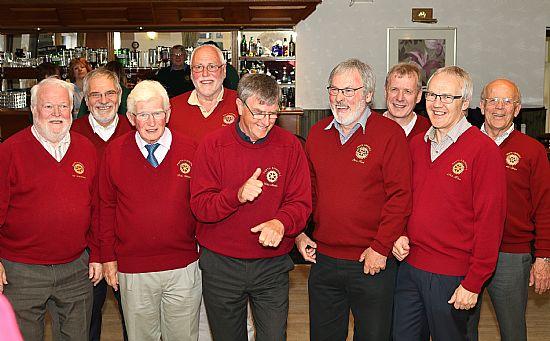