2009 News from the Rotary Club of Perth Kinnoull

Where does the road go which is said to be paved with good intentions? Ah yes I remember and also that all solicitors are said to end up there anyway! Any way I had intended to do a report on the District Meeting for this issue and also on the last business meeting but neither is done and Greg’s deadline is upon me as is the last date for posting Christmas cards and I still have a pile to write, so my Rotary report card for the last month or so reads “must do better”.
I was feeling sorry for myself at the week-end. On Saturday I got up to no downstairs lighting and no heating, I solved the heating problem but had to wait for my brother who was coming to see me anyway to solve the lighting. On Sunday night the power went to the downstairs sockets so no computer, fire or TV, the electrician repaired that on Monday morning but the heating wouldn’t re-start – didn’t realise that until after the electrician had gone. A phone call to Scottish Gas got me sufficiently lit up to persevere and get the heating started myself. Looking back on it all this morning as I got up to heat, light and Breakfast TV, I found the silver lining in my cloud in that I have all these things which can go wrong and the wherewithal to have them repaired.
I hope that you all have a lovely Christmas and look forward to seeing you all in 2010.
Best Wishes
Janet
P.S. remember these important dates for your 2010 Diary – Dinner Friday 12 March and Black Dyke Band Saturday 27 March

Well, folks, the terrors have returned. Remember I told you about the program and rotas page, on the web site, and having to type the data in twice? You do? So I have at least one reader now. I digress; sorry. All that effort and guess what? The whole thing disappeared. That's right. One minute it was there and then..... nothing. And all this without me even being logged on. 23rd November, it was, and I hadn't been on the site for at least a week. Thankfully, Bob had a copy of the original file so at least the frame was available.

You may wonder what this is all about? Indeed. I do as well but I thought you might like to know that paranoia; yes, that is how you spell it, can be infectious. Be right back; need to save.

Hi again. Now the good news. I have to thank Julia, Bob, John, Helen, Gordon and Ian for articles that you will read later. It is so good to be up to date and know what is happening. I quite often find out about an event after it has happened, so I also often wonder what is the purpose of a web site if not to publicise events before they happen. But this month........ er, sorry, two monthsish, I hope you enjoy the Christmas edition.

P.S. In keeping with Christmas, one for the children, Q: What has a bed but does not sleep, and a mouth but does not speak? Answer at the end

The Rotary Club of Perth Kinnoull's annual competition amongst various secondary schools around P certainly found talented young artists. The competition is in its third year and produced some highly accomplished winners, The winning artworks are displayed at the and in

The prize-giving was held at the opening event of the 58th Annual Exhibition of the Perthshire Art Association. Roseanna Cunningham officially opened the exhibition and presented the prizes, kindly sponsored by Specialist Crafts Ltd,  to the winners. President Janet represented the Club after tirelessly arranging the final part of the competition. the judging and the framing.  Picking the winners of the Perth Young Artist Award was hard work for the judges, Betty Ramsay, Albert Sinclair and Ian Scott, pictured below. The final winners were Jack Rimmer from ( S1-S3 category) and Hannah Cox from Strathallan (S4-S6 category). The school submitting the highest standard of work presented for both categories was Strathallan.

Pride of place in the Art Exhibition has been reserved for the winners of the 3rd Perth Kinnoull Rotary Club Youth Art Award. Prizes have been awarded for first and second place in each age group to: 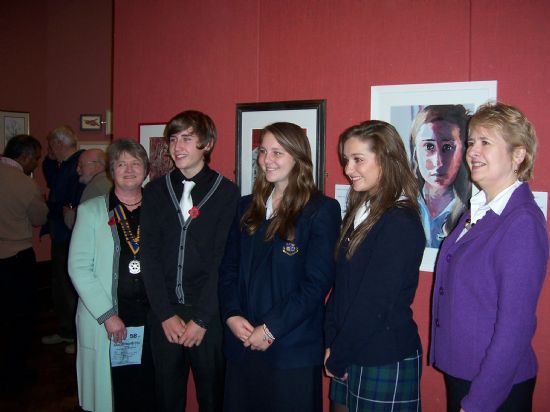 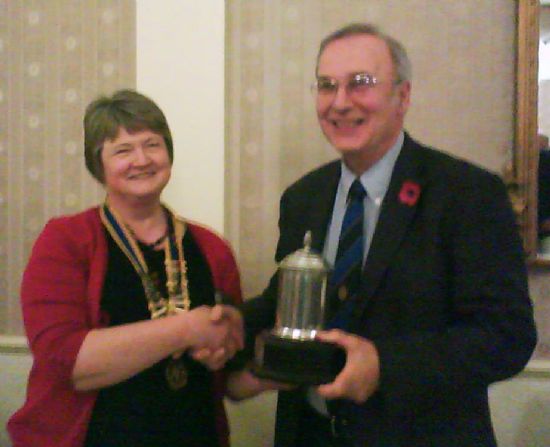 The golf ladder reached a climax earlier leaving the favoured few to play for the Trophy. In the event, Iain received his trophy from President Janet having knocked out Bill Smith, in the semis, and Mike Massey in the final. .

I know we have had more than two speakers over this period but I can only comment on the two that I attended. Not sure why these two were so memorable. Perhaps someone could help me out on this one. Colin? Douglas?

Catherine Cowie of Erskine Care Homes gave a very heartfelt talk on the remarkable work that goes on at Erskine Homes, the leading care organisation for ex-Service men and women in . It is a centre of excellence for integrating residential and respite care. The residents depend on the very highest level of care and support provided by dedicated staff in all the homes. Founded in 1916, Erskine has provided nursing and medical care for former members of our Armed Forces through two world wars and the more recent conflicts and peace keeping initiatives. Re-building shattered lives, restoring dignity and providing first class care to ex-Service men

and women, both young and old, have been the cornerstones of Erskine's unrivalled reputation. However, as an organisation, it can never stand still. Sadly war isn’t a thing of the past and we are already looking after young men and women who have come to Erskine from current conflicts in and . 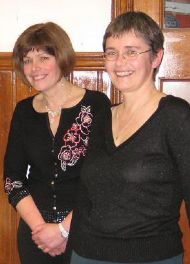 Liz Burke introduced the Club to the workings of the relatively new Inner Wheel of Perth Moncrieffe Club. I say relatively new, although Inner Wheel has been supporting Rotary since 1928. International Inner Wheel is the the largest women's Voluntary Service Organisation in the world. The Perth Moncrieffe Club began in 2004 when the 12 founder members began meeting once a month in the evenings; to be specific, the 2nd Wednesday of each month in the Royal George Hotel at 7.15 pm .The first involvement of the Club was during the Tsunami Appeal in Perth. Further opportunities arose for starting direct service to the community and these were detailed in a slide show..

Peter Smith gave the Club a very welcome talk of his curling exploits as one member of the 2009 World Champion Curling Team who beat Canada 7-6 in the final. The 2009 Ford Men's World Curling Championships was held in Moncton, New Brunswick, Canada, from the 4th to the 12th of April at the Moncton Coliseum. Peter, as second to the skip, David Murdoch, shared his pride with the Club in bringing home Scotland's 5th World Title, with considerable humour. The Club would like to thank Peter for giving up his time to be with us as, it needs to be mentioned, the following weekend he was part of the team that won the Edinburgh International Curling Championship.

In the summer, the Club sponsored Muthu Pandi and Infant Pamela through the Joe Homan Charity. The sponsorship was warmly received by the Charity who have replied to our generosity; surely a wonderful Christmas present for the Club

Long term supporters of the Joe Holman Charity, Gordon and Loretta Whitcomb, were pleased to receive a cheque from Rotary Club of Perth Kinnoull. Through their fundraising this year their donation will go towards equipping the school at Inba Seva Sangam with benches for the pupils. Their generosity also included a gift of art materials for the children to encourage their artistic skills.: 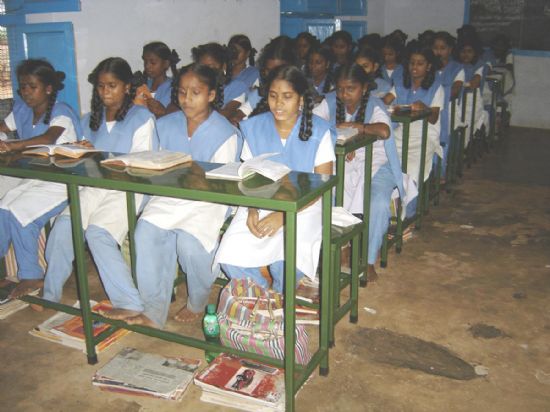