It has been such a short time since the last edition but so much has happened in the meantime. The Club has been exceptionally busy, as you shall see, as well as giving us the time for an emotional look at ourselves. There is no doubt about the high quality of this month's speakers and the high quality of the work being carried out at the moment by individuals and committees; at home and abroad. Back home, the computer is behaving so all is well for the moment giving me time to get on with this edition. Many thanks to both Bobs and Julia for keeping me up to date; to Eva for keeping me in touch and Nick for his timely information. Last February doesn't seem that long ago somehow; it's true what they say about the seasons turning.

The deep snow has not covered the enthusiasm of the Club curlers. Having not done too well in one competition, the Perthshire League curlers then visited Pitlochry to come away 11 - 2 winners and are currently lying second in the league. The novice curlers can be said to have served their apprenticeship with honours

Some new officers were unanimously elected at the meeting and are highlighted below:

At last year's President's Dinner, Kay and I successfully bid in the auction for Mike Massey's time and cabinet making skills. We are completely thrilled with the result. The picture really doesn't do it justice, but gives an idea of his workmanship. He built the cabinets on either side of the chimney breast and the shelving and installed the lighting. 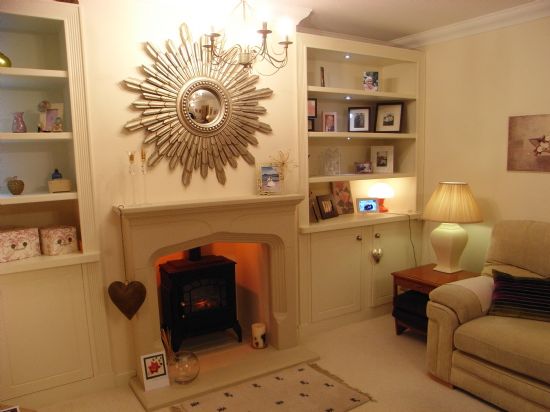 At the same dinner, we won the raffle for the 'Champagne Dinner for two at the . Being incurable romantics we timed the dinner to coincide with Valentine's Day and our wedding anniversary. We enjoyed our very pleasant evening enormously. Our compliments to the chef for a good meal.

Our thanks go to Mike and Eddie 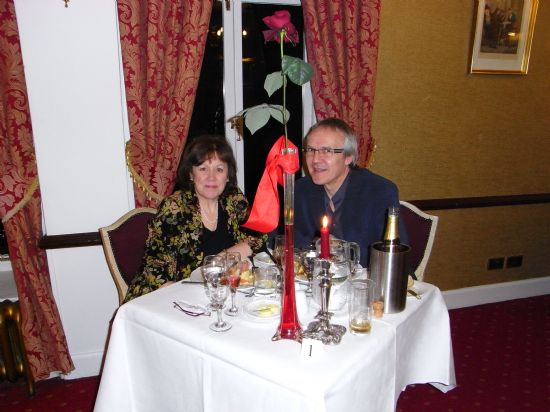 The Club opened this annual commitment with the first interviews at Strathallan School under Nick's auspices on Wednesday 24 February. Eight members attended, viz; Bob, Frank, Peter, George, Michael, Mike and Iain, and are to be thanked for their commitment to this support by the club for young people setting out on their journey..

Rotary Thanks for Life Day

This was declared Tuesday 23rd February 2010, the day of the Club meeting, in aid of the Rotary International Polio Campaign. As part of the event, the Club made a collection at Tesco Stores on Saturday 27th February. Many many thanks are due to John, Bob B, Bob E, Mike and Janet who managed a very creditable £411.30p for their services.

Iain was instrumental in organising the evening meeting with Alistair Holmes and the rest of the Grantham Rotary Club Members on Friday 26th February at the Royal George Hotel. Iain explained that it was an excellent evening and that he was very grateful for the opportunity to see the hotel bedrooms for the first time. You couldn't make it up.

Julia and her committee have been working hard on behalf of KidsOut, the only UK charity dedicated to bringing fun and happiness into the lives of disadvantaged children. The small team work with KidsOut's partners, of which we are now one, all across the UK to deliver innovative, high quality services to disadvantaged children. Because the charity is small, they are actively very effective, rather than just raising awareness, and offer real practical help and support; 83p in every £1 raised goes directly on the services provide to disadvantaged kids, making them one of the UK's most effective charities!

You will all be pleased to know that the Club's support with 2 boxes have been part of the consignment with which the ShelterBox Response Team have set up a ShelterBox camp for up to 1,000 people on the Henfrasa sports field in Delmas, Port au Prince, Haiti, providing emergency shelter for the most in need and the most vulnerable; prioritising families with newborn babies and pregnant women.

Aid for more than 20,000 people has already arrived in Haiti and is being distributed by the Response Team with the help of the Dutch marines, Rotarians, French aid agency ACTED and the French Red Cross. ShelterBox’s team of volunteers in the UK are continuing their hard work packing boxes. Another 3,000 ShelterBoxes are due to arrive by the end of this week taking ShelterBoxes commitment of boxes above the 5,000 mark.

Janet, Tom and Iain were present at the Salutation Hotel on Friday 20th February alongside the featured four top local bands - Shotgun 76, Face to Face, Afterthought and Lateshift, for  Rocking for Haiti organised by the Rotary Club of Perth Kinnoull. What promised to be a great night of classic rock, country and soul  certainly saw the musicians, helpers and crowd uniting to help the earthquake victims in . They were joined during the evening by District Governor Bill Macfarlane Smith and his wife Daphne.

Perth's kind-hearted rockers helped raise over £3300 for earthquake victims. “The evening was a roaring success,” said Helen MacDonald. “We saw a great performance from each of the four bands with a seamless changeover between the acts. Our thanks go to students from Perth College music department who looked after the sound mixing.

“A competition prize for best dress male and female rocker and a raffle completed the fund-raising. In all, £3376 was raised for the victims of the earthquake in Haiti". Great credit for the event must go to Helen McDonald who had the conviction and ability to make her inspirations come to life. “The club would like to thank the Salutation Hotel, Perth College, Face 2 Face, Shotgun 76, After Thought and Lateshift for their generous contributions to the evening.” 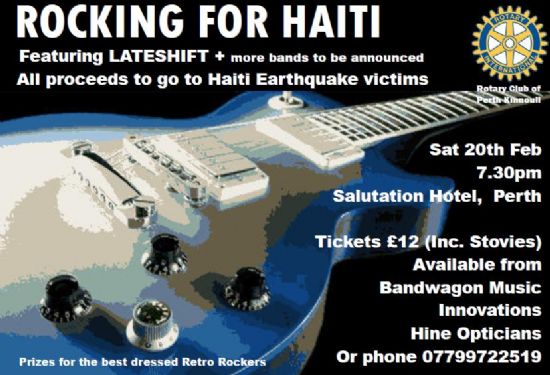 Sarah Mellersh addressed the meeting on Tuesday 2nd February about her new venture Let’s Cook! Sarah is a professional cook with over ten years catering experience. After starting her career in the City in a complete career change took her into the world of catering. Having retrained, Sarah then concentrated her career as a private chef, working for a number of outside catering companies, catering for weddings and parties for up to 500 guests, to looking after private dinner shooting and fishing parties all over the UK. However, more recently she has been teaching and designing cookery courses for both adults and children, some for just one day and others for six months at the Edinburgh School of Food and Wine. And it is here where Sarah’s passion now lies, teaching students all the skills, techniques, hints and tips that she has learned during her time as a private caterer and a cookery teacher, as well as passing on her in depth knowledge for food.

Nigel spoke to the meeting on his career in the army from Sandhurst and Cambridge University to taking the salute as the senior officer at the Edinburgh Tattoo for the last three years. If only our members had known at the time, he would have had more company from the cloudburst. In between, as an officer in the Green Howards, he saw every theatre of war and gave a very personal and intimate account of each of his tours of duty. His was a talk of many thought provoking surprises which was received very warmly and will be remembered for many years to come

Mike is well known to the Club members and gave a humorous talk of the vagaries of retirement. The former headmaster of Craigclowan School and President of the Perthshire Chamber of Commerce found it impossible to 'retire' from life. He explained how retirement from a career or position was just the  opening of new ventures closer to the heart where experience does count. He is enjoying life after the typical scares that touch one at that time of life. 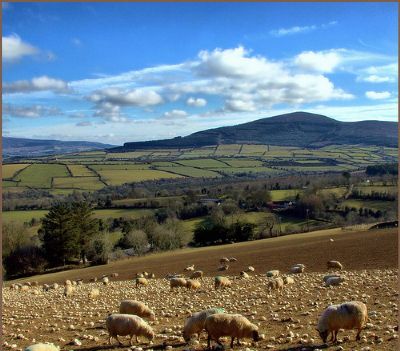