What a great start to my year as President.

The night at the races was excellent again, although some members got caught in the traffic and didn’t make it. The weather was good this year, but the only winners were the bookies. The Queen tribute band at the end of the night made plenty of noise but Freddie Mercury must have been turning in his grave.

Mike Massey has jumped off the , but not such a silly old fool, he’s raised some £ 500 for charity. Maybe the other members of the ways & means committee could do it next year ??

The three club cricket match turned into only a two club affair and again ended with a win for . I think we need a new coach !! or maybe a few younger players.

We’ve now had our Charity Golf Day at Dunkeld & Birnam GC on Wednesday 1 September. What a fantastic day it turned out to be. The weather played its part again and the participants were wholehearted in their praise for the organisation of the event. Again we’ve raised over £2400-00 for charity; half of this sum being committed to the purchase of Aquaboxes and life straws for the Pakistan Flood Appeal, the remainder will be committed to local charities.

The three club golf outing took place at Rosemount on Friday 3 September. Another good night of fun and fellowship and a delighted winner, the club.

This month sees the final of the club golf championship being played and of course it heralds the start of the curling season. What a busy club we are !! 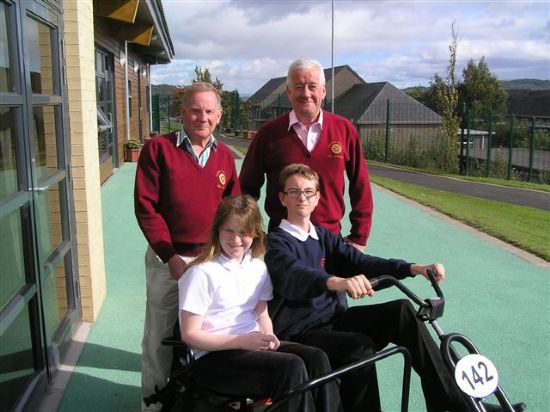 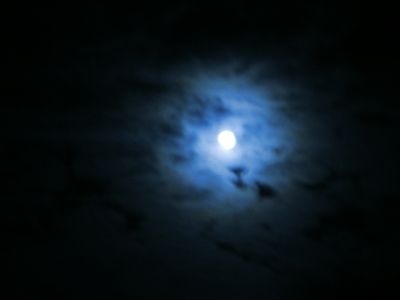 School Quiz finals to be hosted by Perth St. John’s this year.

International and Foundation:  Looking at donating more to Pakistan in the form of life straws and aqua boxes. 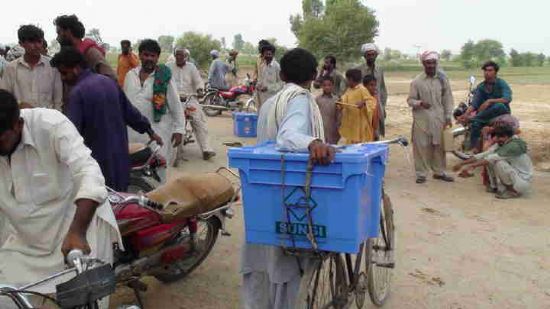 We had 17 Teams competing at the Shotgun Start on what turned out to be a lovely afternoon weather wise as it had been raining earlier in the day. Everybody who played, enjoyed the Dunkeld & Birnam Course which was again in very good condition. The Catering was again of a high standard and the Rotary Club of Perth Kinnoull and their " Golfing Guests" are well looked after by all the Staff up at Dunkeld & Birnam GC.

The Winners of the Team Tournament and who hold the Strathallan Trophy for 1 year were:-  Clark Thomson Insurance Services with a Score of 121 winning on a better second 9 holes from Brown's Pharmacy.

Other Winners on the Day of the various "Challenge Holes" were:-

Hole No 9- "Nearest the White Line"- Sandy Fyfe from the Anderson Beaton Lamond team who was 1.5 feet from the Line.

Hole No 16- "Danny's Drouth" named in Memory of our Late President, Danny Fitzsimons which is a Case of Beer to share with his or her the Team, for a player who scores a Gross Birdie 3 on this short but very tricky Par 4 Hole. This was achieved by John Mollison from the Reid's & Fearn's Team although I never saw the Beer getting opened!

Hole No 18- "Nearest the Pin" was Derek Walker from the Clark Thomson Insurance Services team who won a Bottle of Single malt Whisky.

The " Ladies" Prize for best lady in best Team went to Margaret Watkins of the Elder & Paton team.

The "Hardies Team Ball Prize" of 4 Bottles of Whisky went to the Clydesdale Bank Team of Team Captain, Robert Stark ably assisted by Greg Davidson, Mike Hope and Alan Davies with a score of 71.

Finally it would not happen if it were not for the valued services of the Rotary members of the Perth Kinnoull Club who assist with getting teams, do the scoring, helping on the Challenge Holes, setting up the Course with banners etc, getting Hole Sponsors, placing adverts in the Charity Golf Programme, the production of an excellent Golf Programme, donations of Prizes for the successful Raffle in the Clubhouse.  All these and many other Rotarian's actions made for the Club pledging funds raised on the day, which were well in excess of £2,000 to purchase shelter equipment and Life Straws (personal water purifiers) to the Rotary Pakistan Flood Appeal and also monies to be allocated to local charities. 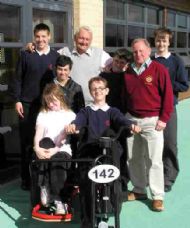 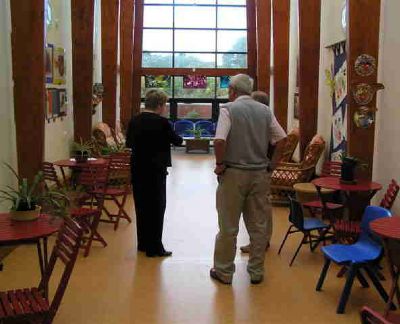 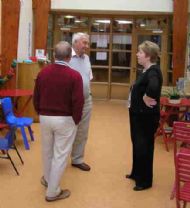 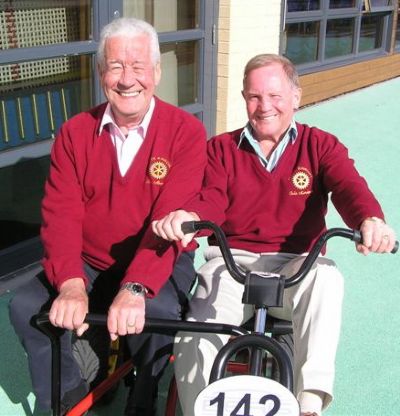 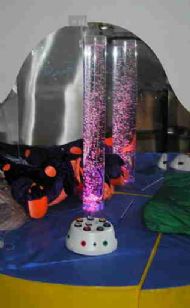 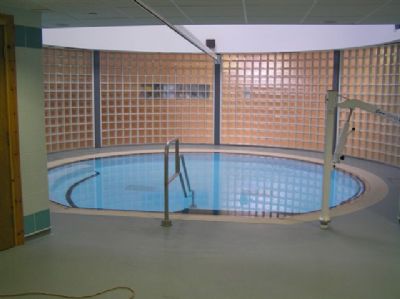 From Jon Crouch of the Jo Homan Charity. 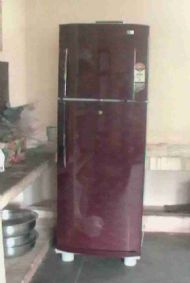 "It was a real pleasure when I received notice of your Club's donation whilst I was visiting projects in India. Please do pass on our sincere thanks to all club members for the £1,100 received.

These funds are being used, as we discussed, to put in place a new computer and kitchen materials necessary in the girls residential home at Inba Seva Sangam. I attach a couple of photos of the kitchen equipment for  ISS Girls home which your club funded. The 2 machines are used to grind vegetables for the various masalas and dhal, etc. The computer is also now in place, but no photo available.

I did visit ISS whilst in India; unfortunately the girls were on a school holiday so I did not have the opportunity of meeting Infant Pamela (her full name). 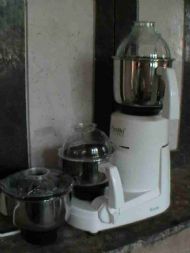 I continue to feel that in partnership with ISS that we are offering the girls a much better chance of a decent future, lifting them out of poverty and we will continue that work for many years to come. As always when I visit projects like ISS I came away with further funding requests to improve the quality of life for the girls, and now I have to look towards raising funds to firstly improve the playground area used by the girls home and school and secondly put in place a vehicle to be used for general transportation and emergency use.

A new school eco toilet block for the girls that we have funded is also now in place.

I did also visit, Nilakottai Boys Town where the

clubs other sponsored youngster, Muthupandi is resident. Again I can confirm that this project continues to do well and the boys are extremely well looked after. I also sponsor a youngster there so I have a personal interest in their success.

So again many thanks for the recent club donation and your support during your year in office.

Visit of 1010 District Governor George Burstan and his wife Mary

George Burstan gave a very clear message to the Club members in a well-constructed and seamless talk. 'Rotary is a large, international organisation' he began, 'but involves intimate families.' He invoked the powerful imagery of building all kinds of bridges all over the world by 'keeping it simple and thinking the unthinkable.'  Of course, the Polio Campaign remained foremost in his mind for which each Club is encouraged to plant purple Crocuses (might be Croci) in their area.

However, his main thrust was towards the young generation where 'Rotary must accept responsibility and become more involved with young people', something he was delighted to see already in place in our Club. Rotoract, Interact and RYLA were existing schemes to this end.

George saw Rotary as an inverted pyramid with structures to support all the Rotary work, remembering that 'Rotary is a voluntary organisation and each Club must remain autonomous.'

He ended his practical and inspiring message with best wishes for the year ahead and a wish to see many members at the District Conference, and the RIBI conference in Dublin. 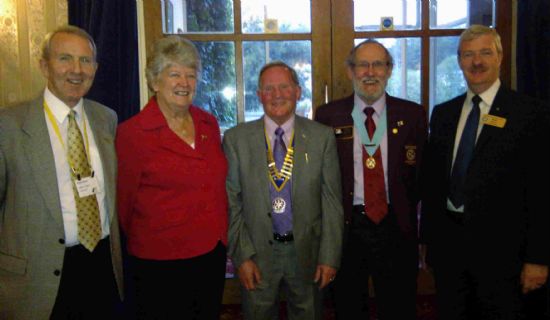 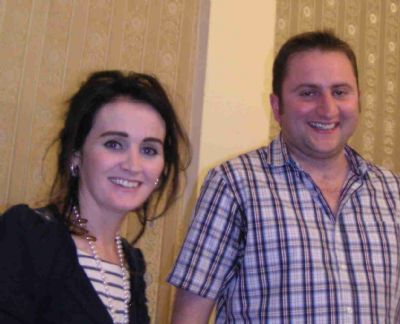 Graham introduced himself as the leader of an outreach project in Perth for those who had, as he said, reached the end of the road in their lives. These young people had suffered in many ways and the Ark Project centred of the Trinity Church of the Nazarenes had stepped forward to provide the care and attention they needed so desperately. This took the form of advice, shelter, food and clothing, as well as someone to rely on in their times of need. The Ark is open on Tuesdays at 7pm but Graham was involved at other times in following up those who attended the meetings. 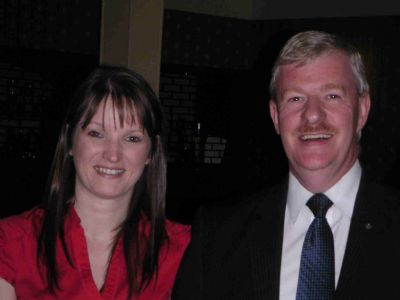 'My name is Gillian Naysmith, I am Mum to 2 wonderful children, Jaymi, my daughter, is 9 years old and Angel to her little brother, Sam, 5 yrs old' So began Gillian in her roller-coaster talk to the Club members. Sam has a diagnosis of Autism and is developmentally delayed. She began writing poetry as a way of dealing with the feelings and emotions that overwhelmed her when she was told that Sam had Autism.

Gillian decided to read and learn and do everything she could to help Sam. She continued 'I have more patience and understanding, more compassion and tolerance. I have learned so much and wanted to share what I have learned in hope that it may help others through the hard times and hopefully give an insight into the lives of our children and families. I hope that I am able to show that Autism doesn’t have to be a totally negative experience and that with the right guidance and help we need never feel alone.'

Part of her experience was the introduction of Sam to horses, which proved to be an enlightening process that culminated in her founding the Horse Boy Foundation UK, following the similar US foundation, and the presentation of her new book.

................ and not forgetting Helen who stepped in at the last minute to confuse us with US place names in songs. Thank you for great evening of entertainment and fellowship. 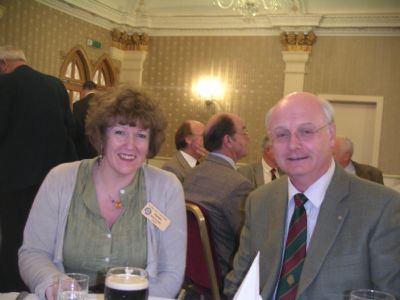 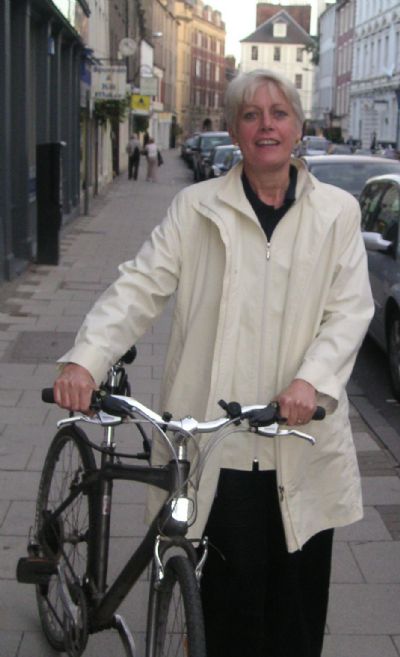 Eva - I've done with walking for a bit.