Sorry about the effort last month: I'm back to plain English now. Can't think what must have happened. October has been and gone, time has shifted and Haiti is still suffering. What a world at the moment. Peter's barbeque happened at just the right time and was enjoyed by all.

One of the most time consuming jobs in compiling Chatters each month is the uploading of photographs. I say this in passing as sometimes it does take an inordinate amount of time loading just one of them. The screen editor seems to be at fault. Now I have a sneaking suspicion that the web site programmers may feel the same about it. What do you think?

Is it me or does the weather appear to be on a yo-yo - wet, dry and sunny, cloudy on alternate days? Just as well those umbrellas appeared in time.

We have had some great speakers this month but I am a little sparse on the activity front. I know the gavel and curling are in full swing now that the

golf has finished. Congratulations to Mike Graham for taking the Club honours on the North Inch and to Bill Smith for winning the Club Golf Ladder Competition.

One of the nicest occasions this month was Julia's birthday. Some surprise drinks and a lot of fun. Here's to many more birthdays

Colin and Brian were the Club candidates on 22nd October 2010.

Visit to Balnacraig was successful - they are looking for table tennis table and equipment.

Fairview Kids Out project on course for the coming year.

Starter-Pack support is on-going.  The Rotary Club of Perth Kinnoull has made a donation to Starter Packs, in Perth, who work with the Salvation Army in providing basic household essentials to needy families and individuals. They are actively seeking all kinds of good condition household items, including bedding, crockery and kitchen utensils.The cash will be used to purchase new items to fill the gaps in donated goods.

Judging of Young Artist of the Year was completed on 5th October. Winners and runners-up were framed and exhibited on Friday 5th November. Read on for more detail.

29th October 2010 was the day for planting crocuses at Kinnoull Primary School.

President Colin presenting the trophy to Bill Smith for winning the Club Ladder .

Perth businesswoman Helen MacDonald leaves for India for the trip of a lifetime; Rotary International is on the last push to eradicate polio, and Helen, along with a group of Rotarians from around the UK, is spending two days helping immunise children against the dreaded disease in New Delhi. Rotary International is set to raise two hundred million dollars, matched by the Bill and Melinda Gates Foundation, in a bid to rid the world of polio for good. Thanks to Rotary and its partners, the world has seen polio cases plummet by more than 99 percent, preventing five million instances of child paralysis and 250,000 deaths. When Rotary began its eradication work, polio infected more than 350,000 children annually. In 2009, fewer than 1,700 cases were reported worldwide. Helen and the other volunteers will use this experience to raise awareness of this wonderful project throughout the UK.
Helen, joint owner of Innovations of Perth, then flies south to Madurai, Tamil Nadu, to visit two children whose education is partly sponsored by the Rotary Club of Perth Kinnoull. Helen will meet up with representatives of the Joe Homan Charity, whose aim is to provide children with a safe and secure environment, the opportunity of an education, and skills training to set them on a life-long path towards independence, happiness, and the chance to escape poverty forever.  Pamela and Muthapandi have been sponsored by the club for the last four years, but this is the first time anyone from the club will meet them in person. Helen said; ‘the children send us regular photographs and letters keeping us up to date, but it will be lovely to meet them face to face and see the work of the Joe Homan Charity at first hand’.

The Rotary Club of Perth Kinnoull hosted the Perth Young Artist Competition for a fourth year in conjunction with Perth Art Association. The seven local secondary schools were invited to submit work and the judges, a group of professional artists provided by Perth Art Association, were set a difficult task when they assembled at Strathallan School in early October. 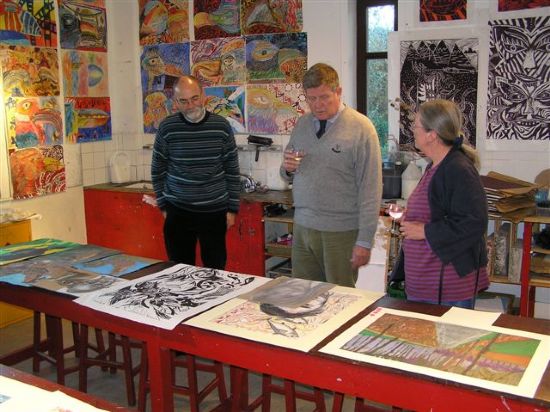 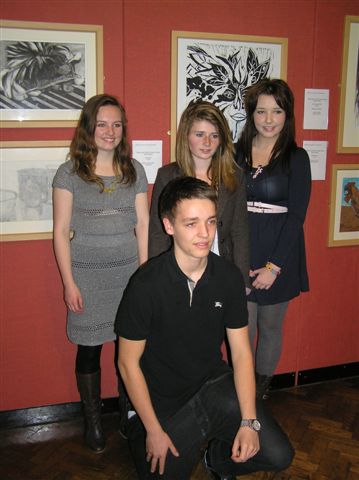 The prize winners with their pictures 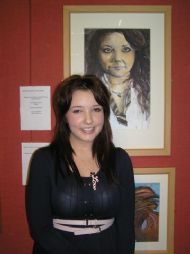 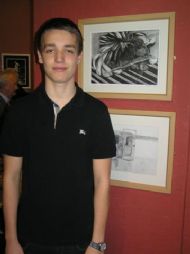 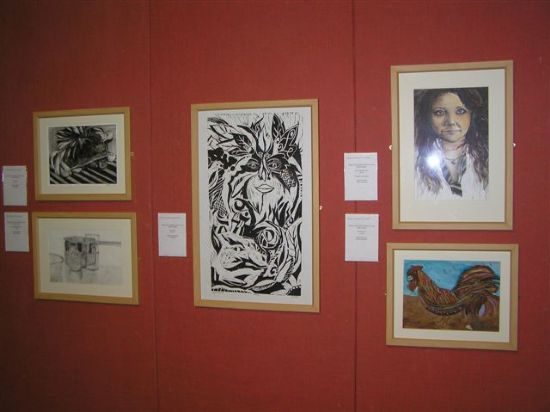 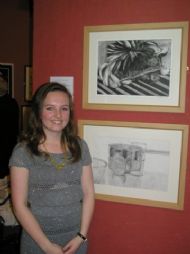 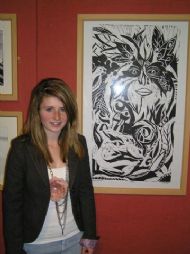 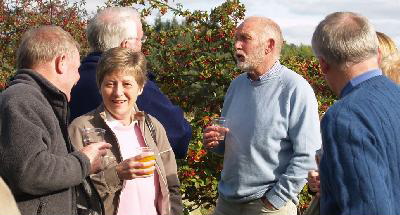 So, there I was, hanging from the bridge by a thread. 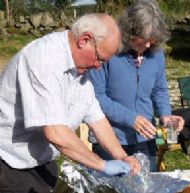 Peter, what have you done to the teeth?

I caught it myself, you know. 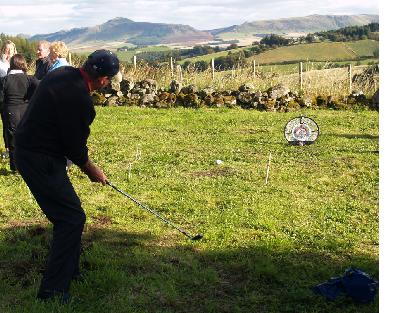 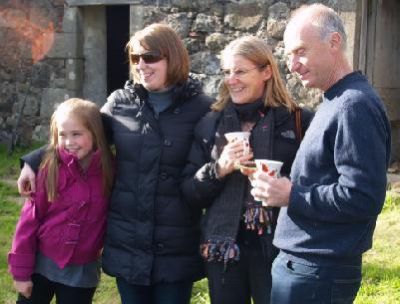 John joined the Club at the beginning of October to present his rowing exploit from London to  Land's End with three friends. They were taking part in the Virgin GB Row, a gruelling 2010-mile journey around the coastline of Britain accepted as the toughest rowing race on earth.

John was part of the four-man team, the Misfits, aboard his trimaran Orca. The venture had to be abandoned although John did attempt to continue for a while before being rescued by the coastguard.

Kirsten gave the Club an informative and lively talk on her early exploits with Kinross Cricket Club. Her enthusiasm actually saved the cricket club from extinction through her involvement, not always welcome, with the youth teams. Such was her prowess and organisation that she has developed a healthy training schedule for young boys and girls in the area. Her girls teams now hold National honours. So it has been no surprise that she was offered a wider remit by the Local Government. 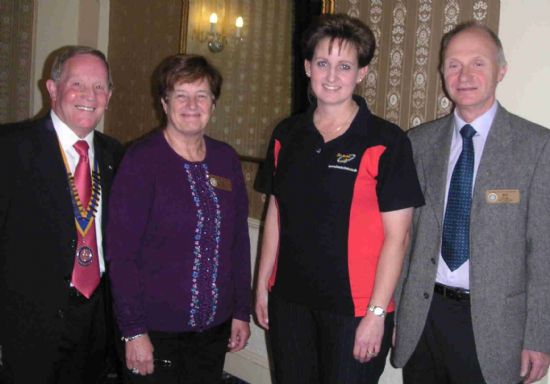 There can not be many more delightful persons than Booby Sommerville from the Blairgowrie Rotary Club. He visited us not to talk about his ministrations or indeed his big cat sightings but, rather, of a time past when he was a leading microbiologist from Glasgow University called upon to work for the World Health Organisation. Called upon, that is, at a moments notice with his Blue Passport which gained him access to any frontier in the world. He regaled the Club Members with the more intriguing visits that he made round the world and kept everybody well entertained for some time. 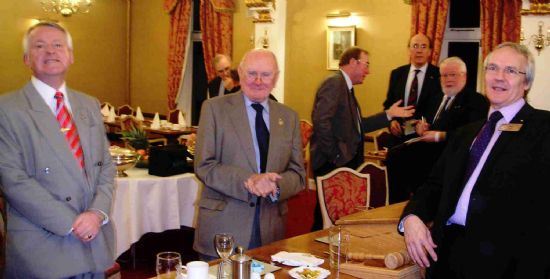 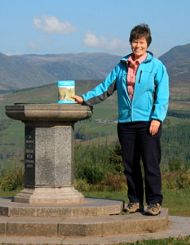 Sadly, I was not in attendance when Felicity gave her talk about her forthcoming book, launched recently at Auchingarrich Wildlife Centre, and the series of books that she has produced on Highland walks. However, everyone seemed quite animated about her presentation and quite intrigued by the detail that she has put together to guide walkers through the County.

And finally, from our St. Lucia correspondent.