Elaine Cameron gave a sound explanation for all the work that she has taken on with refugee families in Perth. She was accompanied by Iman Sari from Syria who has been settling in Perth for around three years.

Elaine, a career teacher from Ireland, is a member of St John’s Episcopal Church in Perth and is very involved with the welcome to refugees and the setting up of the International Café. It was here that she became involved with the UK Government program for vulnerable Syrians, a scheme which allows for five years of support and care before they can decide on their own futures. There are seven families on the scheme with between eight and ten volunteers on the refugee integration strategy.

Iman spoke very well about her life in Aleppo in Syria and the sudden misfortune that overtook her family. She tragically lost her husband while her brother is in Turkey and her sister in the Lebanon. Keeping in touch is so difficult. Studying cookery at Perth College has brought her to the community where she finds everyone nice and friendly.

The church groups have been taking the families on trips to visit the Scottish cultural areas. Finance from the local council has been basic to improve the English language of the families. Imran has three children who are settling at the school and becoming happier and more relaxed with time. Of course, she would like to visit with her family in Turkey at some time but, for now, she feels safe and happy and enjoys life in Scotland. She was very sincere with her thanks to the Membership which was reiterated by Greg Ross in his vote of thanks to both speakers. 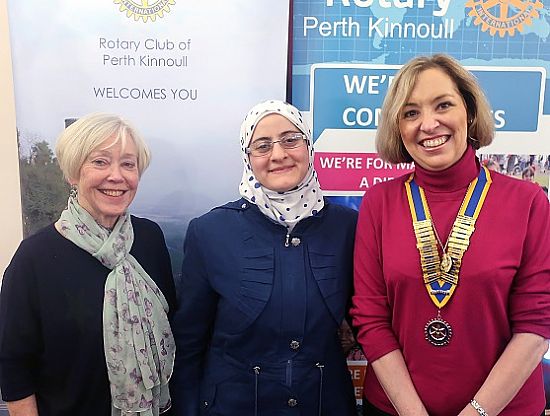