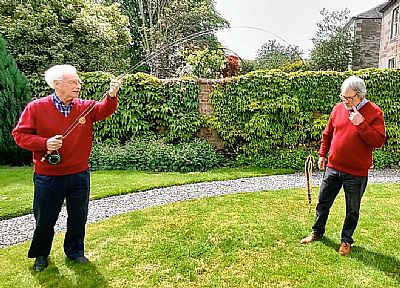 With no possibility of a physical handover, outgoing President Ian thought it might be quite interesting to try something totally different to hand over the chain of office to President Elect, Chris. Knowing how keen a fisher he was, Ian asked Chris to bring in a fishing rod for the handover “ceremony” which took place, by kind permission, in Secretary Bruce’s lovely front garden.

In handing over the Presidential chain at the end of the fishing rod, Ian congratulated Chris on his appointment and wished him every success during his term in office which, due to current circumstances, would be fairly challenging! In response, and by the same method, Chris then 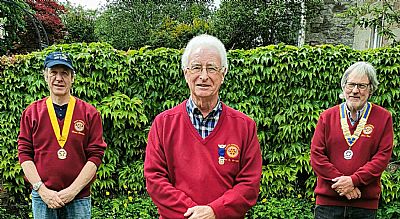 handed over the Past President’s badge to Ian and thanked him for his kind words and paid tribute to him for all his hard work and commitment during his term of office.

Similarly, Chris then presented Brian with his Senior Vice President’s chain stating he was looking forward to working with him over the next Rotary year. Videos of these three presentations were shown at the Club’s Zoom Assembly and Handover Meeting on 30th June.