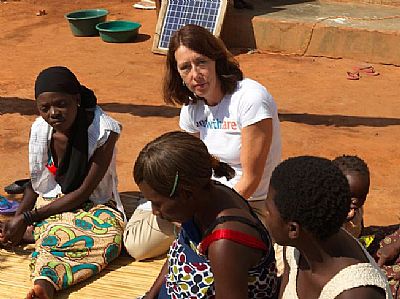 Although we were disappointed when the Lendwithcare seminar was cancelled, which was to have been hosted by us in the Royal George Hotel in April, we were delighted to welcome Tracey Horner as our special guest speaker on Tuesday.

As Project Manager, Tracey has overall responsibility for Lendwithcare and she has been the driving force for the programme since its inception in 2010.

She indicated the charity provides loans by Microfinance, which is a category of financial services targeting individuals and small businesses who lack access to conventional banking and related services. It is designed to reach excluded customers, usually poorer populations who may be geographically isolated, and help them to become self-sufficient.

Each loan can be from £15 to a four figure sum and priority is given to women as they tend to support the family much more than men. These women can use the money to set up basic to small businesses or buy plots of land or small holdings to raise chickens for their eggs, grow fruit and vegetables or rear cattle or goats. Once the business is in profit, the loan is repaid to the  funding partner or, most likely, is used to help another entrepreneur. It was gratifying to hear that less than 0.5% of bad debts were recorded.

Over the last few months, Coronavirus has affected the number of loans they have received as many of their funding partners have gone into lockdown and unable to provide any loans. In response, Lendwithcare temporarily stopped lending and launched a business solidarity fund appeal raising an amazing £245,000 which was used to support many of their traders during the current pandemic.

Tracey advised her small team work hard to ensure investors have the best possible experience supporting poor entrepreneurs so that their money is lent responsibly and fairly enabling these entrepreneurs and their families to have the best chance of working their way out of poverty.

We were advised that some 897,000 loans from over 60,000 lenders to around 129,000 entrepreneurs have been granted with in excess of £26 million loaned since Lendwithcare was set up in 2010. Of this amount, an incredible £1 million has been loaned by Rotary Clubs throughout the UK since it’s inception.

To date, Perth Kinnoull has given 59 loans, helped 360 entrepreneurs and created 193 jobs and we are proud to have played a very small part in this success story.