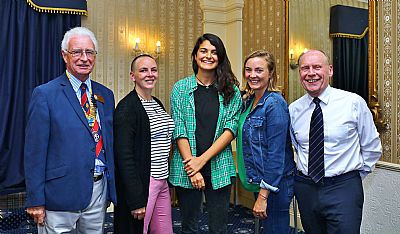 Suzanne Milne, a mum of two from Scone, had the opportunity earlier this year travel to Lesbos, Europe’s front line in the refugee crisis which has been ongoing since 2015. There she volunteered with Attika Human Support; the only “welcome everyone” distribution point on the island.   She has recently returned from Moria which houses about 8,000 asylum seekers.

Suzanne was so shocked at the reality of the situation for people living in refugee camps on the island that when she returned to Scotland she wanted to do more to help.   Astonishingly, almost 40% of those arriving in the refugee camps were unaccompanied minors

Tonight she talked of her personal experience, what life is like on Lesvos and how she has been engaging with the local community in Perth to raise awareness and encourage people to get involved with her mission.

Since April, Suzanne has been collecting clothes, shoes and hygiene products to send a 40ft container to the island for distributing to the people there.

She said that supplies were desperately needed and was grateful for all the donations of clothing she has been given which will be shipped out soon. She even had her head shaved if she raised her target and has now done so through crowdfunding. (The vehicle has now left Perth en route for Lesvos).

Suzanne was accompanied by her friends Deyana Mineva from Bulgaria and Ashley Dwyer, a retired US Army veteran with two spells of service in Iraq, who has been working alongside her in Lesvos.