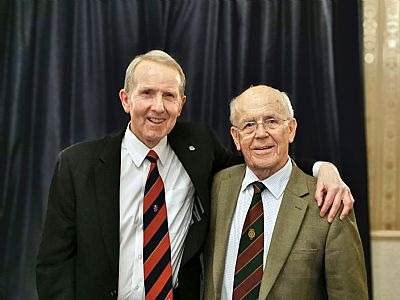 Rotarian Brian Raine (on left), a founder member of this club, was our speaker this evening who entertained us with tales of his experiences organising and taking part in world tours involving rugby, hockey and pipe bands.

As a history teacher, housemaster and head of games at Strathallan School in Forgandenny Brian organised a successful tour in 1988 with the boys rugby and girls hockey teams to Singapore, Australia, Fiji and Los Angeles.  The tour included 47 boys and girls and just 5 staff!

1999 saw him embarking on a Rugby and Pipe Band tour of Australia with the pupils of Queen Victoria School, Dunblane.

In his younger days Brian was a rugby player of a very high standard.   He started playing when he was at grammar school in Durham, played in the Durham County schools team and was a final England Schoolboys triallist.   During his time at university he played a part in the County Durham squad.   Following his move to Scotland in 1970 he played with Edinburgh Wanderers and later Perthshire.

Frank Sloan, his host for the evening, paid tribute to his skill as a player and thanked him for his inspiring talk.