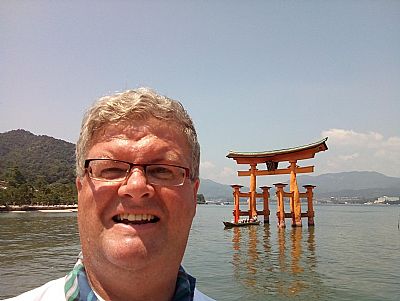 Tonight’s guest speaker was Callum Farquhar who is the Regional Commissioner for East Scotland Scouts, looking after an area between the Forth and the north of Angus including Perth & Kinross. His talk was on the devastating effect the 2011 Tsunami had on the east coast of Japan, the events which then unfolded along with the involvement and strong links of the Scout group at Cairneyhill, Dunfermline.

Having taken parties of Scouts to Kamaishi on a fairly regular basis for 30 years, Callum advised they knew the area well and had built up numerous contacts and friendships over a long period of time. He described how the region had been hit by previous tsunamis, in 1896 when the town was totally demolished, in 1960 when much of the city was destroyed and then the horrendous one which struck on the 11th March, 2011. This was the largest earthquake ever to hit Japan registering 9.1 on the Richter scale with its epicentre 70 kilometres offshore. 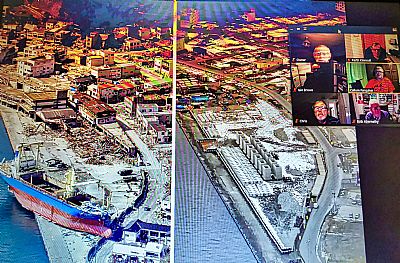 Around 1250 people from the city were killed but, in what was called the “Miracle of Kamaishi” only 5 school children lost their lives and that was because they were not in school at the time. Initiated by a Professor of Civil Engineering, all school children were taught, and practiced, what to do if there was a tsunami and the evacuation drill proved extremely successful. These 5 young deaths represented only a 0.17% loss of life compared with a 70% loss of school children further up the coast.

When hearing of the tragedy, the Scouts raised an amazing £10,000 which they sent out to the stricken area. On a subsequent visit, one of the most harrowing experiences for the group was seeing the total destruction of houses and homes they had previously stayed in. The Cairneyhill Scouts replaced all the scout regalia for their Japanese counterparts.

Callum showed before and after slides of the rebuilding of the town where all work completed was  between 15 and 20 meters higher than before. A new Community Centre was constructed and hand pumps installed at various locations ensuring fresh drinking water would be available if a further tsunami struck. On the site where two schools had previously stood, a sports stadium was built which was used during the 2019 Rugby World Cup. The seats were made from the trees uprooted during the catastrophe and the stadium now stands as a memorial to all those who lost their lives, a most poignant reminder of that day in March, 2011.

Finishing on a happier note, Callum showed slides of the Japanese and Scottish Scouts enjoying a BBQ with a difference. The hosts had provided scallops while the visitors supplied haggis and, yes, the Japanese youngsters even had smiles on their faces as they enjoyed our national dish! He concluded that their memories will be of the wonderful friendships made, not the tsunami.