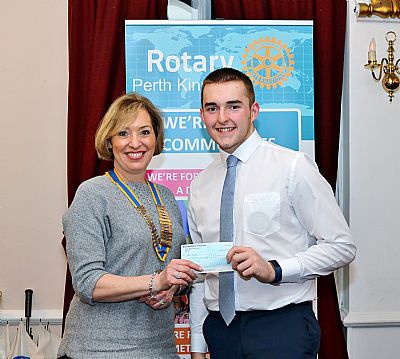 It was with great delight that we learnt that Ben Leitch had been awarded a Sporting Blues Award for his outstanding talent in wheelchair basketball. Ben, of course, was the 2019 recipient of our £500 SportsAid sponsorship cheque which recognised his exceptional achievements in his chosen sport.

This prestigious award is presented by the University of the Highlands and Islands and Highlands and Islands Student Association in recognition of the contributions of athletes connected to the University to Scottish, British or World sport. As a student at the University, Ben said “I am delighted to be recognised for my achievements and have been honoured to play for not only Scotland but for Great Britain. I am currently working as a tier one academy athlete with a goal to being involved in the 2022 Commonwealth Games as well as the 2024 Paralympic Games”.

We wish him well for the future and look forward to hearing about his continued success.

Ben is seen here last year being presented with his sponsorship cheque from Gillian Marsh as President.