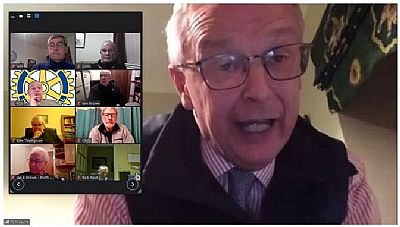 A very familiar face was warmly welcomed back to the Club as our guest speaker this evening - former member, Tom Laurie, who is a partner with D M Hall, Chartered Surveyors, Perth. Tom updated members on the property market since the first lockdown last year both generally but mainly in the local area.

He described the Perth situation as a bit of a rollercoaster since last March and something no one had ever experienced. It was a case for keeping a level head until the market established itself and, in the early days, it stagnated. Then, and quite frighteningly, the sale of rural properties took off where inspections and viewings were all by video! During May, physical inspections of properties could be done in the presence of the owners which triggered off many English buyers coming into the Scottish market. 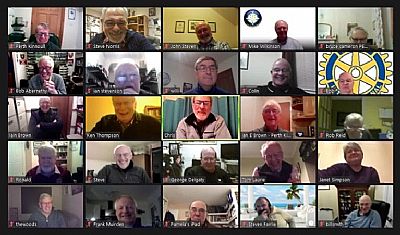 After the initial lockdown, Tom advised he had never experienced such a demand for property which he described as a “tsunami”! Many people had extra money available due to canceled or postponed holidays and had used this to buy a new house. Again, many potential buyers were looking for rural locations with some properties selling for up to 50% more than their valuation. In addition, a number of properties that had been on the market for some time began to sell and at inflated prices.

It was not all good news, however, with a couple of sectors suffering, namely some of Perth’s many flats and parts of the city centre. After answering numerous questions on a variety of related property topics, a most generous vote of thanks to Tom was given by Janet Simpson ...... from her new house in Aberdeen!