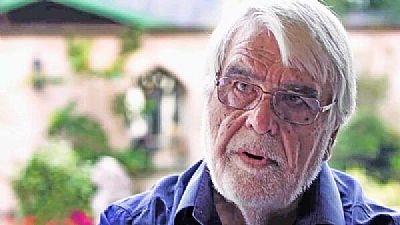 We were absolutely delighted to welcome Peter Hounam as our special guest speaker this evening. In introducing Peter, Gillian Marsh advised “Peter is a former investigative reporter at The Sunday Times, columnist at the Daily Mirror and presenter of Channel 4’s Despatches and the BBC’s investigative journalism stalwart, Panorama.

Peter is most famously known for his work on the Israeli nuclear weapons program leak and subsequent kidnapping. He has stood up against the behemoths of power, exposing international smuggling rings and unearthing government corruption tied back to weapons of mass destruction. Peter’s forthcoming book, ‘Goliath’s Guilty Secret’, pulls together a lifetime of research culminating into what must be the cover-up of the century”.

Peter said he took a degree in Physics but finding the work too difficult and exhausting, started writing for newspapers in the early 1970’s. When at the Evening Standard, he was made their Investigative Journalist and did various exposés including one about London Transport. When writing for the Daily Mirror, he exposed a Danish firm for selling donated clothing meant for deserving and poor families.

Writing for The Sunday Times in 1986, he revealed the secret of an Israeli subterranean nuclear bomb factory deep under the Negev Desert with the capacity to destroy entire cities. He gleaned the information with the help of a disillusioned Israeli nuclear technician who was later jailed for 18 years for divulging this. Now working free lance, Peter returned to Jerusalem in May 2004 for the release of the Israeli technician for a BBC documentary when he was arrested by a number of plain clothes police officers. He was thrown into a disgusting cell, interrogated and detained for a day which attracted intense media coverage after which he was released without charge. The BBC broadcast the documentary the weekend after Peter returned to the UK.

In another example of his work, Peter talked about a documentary he made for the BBC in 2003 regarding the Israeli attack on the American ship the USS Liberty in June 1967 in the Mediterranean. This happened during the Six-Day War when the American Spy ship was sailing in international waters which resulted in 34 Americans being killed and a further 171 being wounded. Israel later apologised for the attack claiming it had mistaken the ship for an Egyptian one but several sources believed it was deliberate, staged to conceal Israel’s impending seizure of Syria’s Golan Heights which happened the next day. Some even said the USA placed the ship there intentionally to assist its Israeli allies!

With the above being just a fraction of Peter’s exposés, all those present will be eagerly awaiting the publication of his latest book due out later this year.