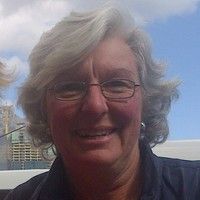 It was quite fitting that our last guest speaker of the Rotary year was one of the most dedicated, committed and enthusiastic Rotarians we have ever had the privilege of inviting to speak to our Club. At the end of the meeting when asked how did she manage to find time to undertake all her numerous Rotary projects as well as a full time job she replied “Maybe that’s why I am still single - I don’t have time for a man in my life”!

Elizabeth (Biffy) Danckwerts is a Tour Guide in Cape Town and has been a Member of the Rotary eClub of Innovation for 16 years. She has served on various committees, mainly service projects, with youth and foundation her main passions. Currently, Biffy is serving her second year as the Rotaract Chair of Rotary District 9350. Much of her time is spent in the townships of Cape Town, especially Khayelitsha, where she has been involved with a primary school, ages 5 - 15, and a crèche, ages 2 - 6, for the past 10 years.

She started her talk by quickly running through a number of projects and activities she has been involved in over the past few years such as bikes for rural schools, charity shops, Christmas handouts, refurbishing the science laboratory at a school, collecting and recycling plastic from the beaches and Rotary family health days. As a Tour Guide, she has a close link with British Airways and the crew frequently brought donations with them which she put to good use in the deprived community.

Biffy then spoke enthusiastically about the work undertaken at one school in Isiphiwo where there are over 1,200 pupils with a teacher/pupil ratio of one to 40/42 students. With Government help, she was able to get seven new classrooms and increase the number of computers from 27 to nearly 100 giving each child approximately 1.5 hours study time on them per week. When the new toilets and wash hand basins arrived to support these classrooms, they were all at adult height but she arranged for a local firm to have them lowered. A kitchen has also been installed giving each child at least one square meal a day. In addition, a garden has now been established which greatly assists with providing food for the youngsters.

Not content with what she has already achieved, Biffy is now actively seeking further finance for a further five new classrooms, two offices and two storerooms. Also, money is required to assist with the cost of school clothing and for additional training for teachers, especially special needs.

In proposing the vote of thanks, Frank Muirden who had visited South Africa and seen some of the areas which Biffy referred to, described her fantastic work as outstanding, incredible and truly inspirational. It goes without saying, all of those attending wholeheartedly agreed.