The Rotary Club of Perth Kinnoull gave a donation of £3,500 to the Tayside and Strathearn Help for Ukraine (TASH4Ukraine) that will pay for a lorry load of supplies to be sent to the Polish/Ukrainian border where they work with a charity there so that these supplies can be issued to those in need.

Club President Brian Johnston was accompanied by Rotarians Steve Fairlie and Ken Thompson for a tour of the facility that Ken Simpson of TASH4Ukraine is running out at Errol Airfield. Ken Simpson showed us pictures of what it was like a few weeks ago (pandemonium!) and I can safely say that from that to the slick operation they have now is nothing short of miraculous. Not only have Ken and his team sent multiple lorry and van loads of supplies but also recently sent an ambulance out there.

The dedication that Ken and his team have is inspiring.

Pictured are Graham Ogilvie from Morris Leslie Group who are the main supporter of TASH Ukraine, Steve Fairlie, volunteer Kathleen, Brian Johnston, Ken Thompson and Ken Simpson. Not pictured is the large stuffed pink flamingo that's the mascot of the organisation as Ken Simpson told us it was one of their first donations from a wee local girl who wanted to help out. 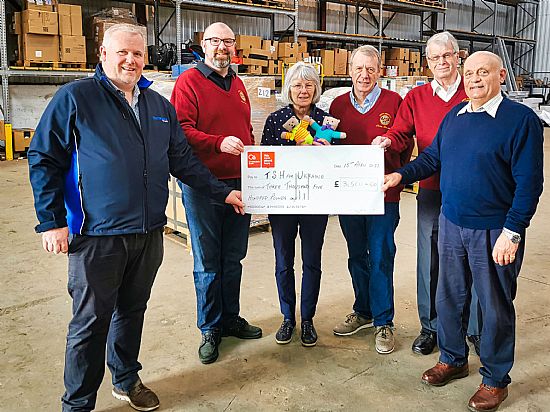 If you'd like to donate goods or lend a hand, TASH4Ukraine are located in one of the large units at Errol Airfield and their facebook site is linked.