We've had an update from one of the young sportspersons that we sponsored this year in association with SportsAid Scotland from recent competition.

- A trip to Durham ended in a loss for University of Edinburgh but, along with the foil and epee fencers, Rory and his sabre teammates put in a good performance against a very strong Durham University team.
- The 2022 Scottish Open was held in Largs and was won by our very own Rory McLellan! (photo taken at the end of the final) This was also a qualifying event for the Senior Scotland team for the Commonwealth championships and Rory is in a very strong position to make the team.
- This year's Under-20 Scottish Championships, in Bathgate last weekend, another gold for Rory. He is now sure to be in the Scotland team for the Junior Commonwealth Championships, being held alongside the Senior event in London in August.

So, a narrow UK national semi-final loss for the University team, and two wins at the two individual events since your generous award! An immediate positive impact that I hope your other athlete Hannah is also experiencing in her events.

The Scotland squads for the Commonwealths are being announced in early April, and there will be two or three training camps, probably in Europe, in preparation for the event. And a few blades will no doubt end up in several pieces during those sessions!

and from 18th April:

Another successful weekend for Rory - he won the Birmingham International event. He's not wearing them in the photo, but he invested some of your generous funding into a new pair of fencing shoes, and came out on top from a field that contained most of the UK's top fencers - in fact the other three here are GB # 2, 4 and 8 in the most recent ranking list. This should move Rory into the top 16 when the rankings are updated.

We are very grateful for your support and will keep you updated. 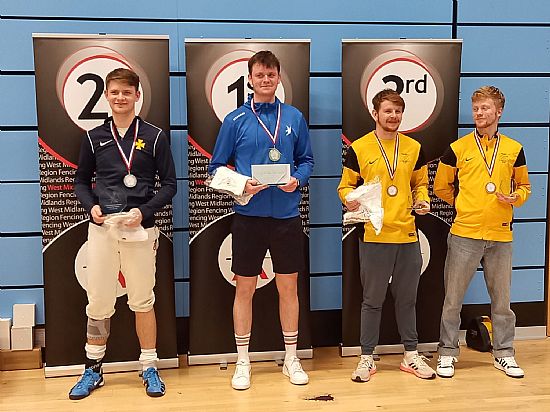